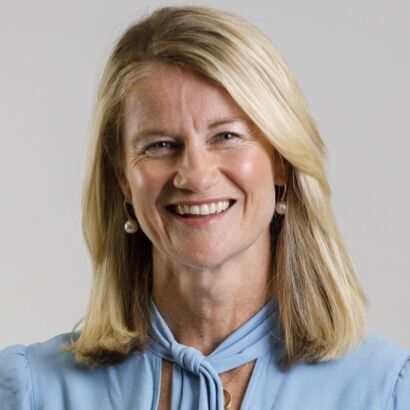 It has been an extraordinary time for Aware Super chief executive Deanne Stewart who has completed three big mergers in the two years she has helmed the $155 billion superannuation fund.

Following the mergers of First State Super, VicSuper, WA Super, Stewart has a lot to say about doing deals during the pandemic.

She is also finalising a tie-up with VISSF, one of the country's smaller funds with $900 million in assets.

First of all, mergers are tough to pull off at the best of times, she says.

They create uncertainty by their very nature.

But trying to bed them down during coronavirus lockdowns was a more bewildering experience than usual, adding to the anxiety.

"People worry about what the merger means for them, what it means for the organisation, and whether they have a job," Stewart explains.

"You needed to be that much more nimble and adaptable through that period and dial-up communication and the degree of care."

Her solution was to almost over-communicate to staff working at home. She talked to them about the merger remotely every week - even when there was no real news. "We wanted to make sure we were completely transparent and that people knew where we were at," she says.

Yet, while working remotely in virtual teams has kept people connected to varying degrees during the pandemic, it did not work out so well with merger partners.

The usual stresses became even more acute. In fact, being forced to work remotely with board members and executives during a merger was one of Stewart's biggest challenges.

Stewart said merger partners usually spend a lot of time together to understand each other's culture and check that there is an alignment of values and a vision of the future.

"That alignment with merger partners is critical. "We were very conscious that the interests of the members were aligned.

However, spending time together was not possible with lockdowns.

"Building trust is vital and during Covid, where people were working remotely, there was much less opportunity to do that," Stewart argues. "There's something about being together in a room eyeballing each other."

Face-to-face contact is essential, and without that, if interests are not truly aligned, there is a chance that the merger could fail or take much longer to close because of disagreements.

Initially set up as public sector superannuation funds, First State Super, VicSuper, and WA Super have very similar members with similar objectives. "By focusing on the best interest of those members, we could navigate difficult topics without anyone trying to argue that their way was best.

"In that case, we found we only had to ask what was the right thing for our members both culturally and strategically."

For instance, Aware Super has more than 20 percent of members in the retirement phase of the superannuation cycle. This is highly unusual. Most industry funds have about two or three percent at most.

Getting mergers across the line during lockdown boiled down to two things. Importantly, industry fund mergers must be in the best interests of the members. "While scale or self-preservation is important, it can't be the reason for doing the merger," she goes on to say

Steward argues that executing a merger comes down to expertise.

"Mergers are technical and resource and time-intensive and deep expertise in the merger process is essential.

"So, you don't enter into deals lightly."

After each merger, the superfund's knowledge about completing mergers and making successor fund transfers increased.

"Each time we wrote a playbook and then streamlined the merger process, we got better and better. And that has really helped,"

"If you don't have that playbook, mergers can be drawn out."

Still, even with a playbook, mergers are complex

The chief executive is currently talking to Canberra and the regulators about making the process more efficient for certain super funds.

Before a successor fund transfer can happen, the receiving (successor) fund must provide members with 'equivalent rights' to those that members in the outgoing fund had before the transfer.

"The equivalence test is particularly burdensome if an under-forming fund is looking to merge with a top performer," she says.

In that instance, she would like to see almost a pro forma one-pager asking if the destination fund is better overall for members.

"I can't say we have the answer yet, but we are engaged in these conversations since we're open to more merger opportunities.

The enormous task of executing mergers in the thick of the health crisis has reinforced Stewart's view that traditional leadership is not helpful.

And, while it's hard to see a silver lining with the pandemic, she thinks Covid has brought about a much more humanistic and more modern leadership style.

"When you think of who showed great leadership during this time, it was those who showed compassion and empathy for the circumstances people found themselves in," she says.

"You realise nothing else matters if people don't feel safe and connected to an organisation."

When Covid struck, Aware Super was quick to offer special leave for people with kids or those with caring responsibilities. Stewart also nixed meetings on Fridays so that people could get away from screens. Also, people languished during extended lockdowns so helping them manage their energy levels was critical.

Ultimately what has changed for Stewart is that success looks different. "Leaders need to get used to staff not being present and be outcome-driven. It doesn't matter what hours people work or where they are physically as long as they deliver the right outcomes."